Post-colonial studies related to Germany’s colonial past is just one of the foci that the book Pursuing Whiteness in the Colonies. Private Memories from the Congo Free State and German East Africa 1884-1914  highlights. 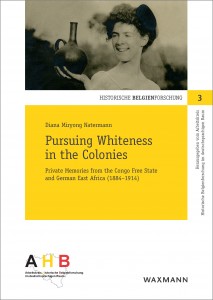 Pursuing Whiteness in the Colonies offers a new comprehension of colonial history from below by taking remnants of individual agencies from a whiteness studies perspective. It highlights the experiences and perceptions of colonisers and how they portrayed and re-interpreted their identities in Africa. The transcolonial approach is based on egodocuments from Belgian, German and Swedish men and women who migrated to Central Africa for reasons like a love for adventure, social betterment, new gender roles, or the conviction that colonising was their patriotic duty.

The author presents how colonisers constructed their whiteness in relation to the subalterns in everyday situations connected to friendship, animals, gender and food. White culture was often practiced to maintain the idea(l) of European supremacy, for example by upholding white dining cultures. The welcoming notion of ‘breaking bread’ was replaced by a dining culture that reinforced white identity and segregated white from non-white people.

By combining colonial history with whiteness studies in an African setting the author provides a different understanding of imperial realities as they were experienced by colonisers in situ.

Since having finished her PhD on which the above publication is based, Diana Natermann continued on to a novel interdisciplinary project between the research centre “Hamburg’s (Post-)Colonial Legacy“ and Hamburg’s Ethnological Museum. Ever since, she has been directing her research attention towards German colonial photography and visual history. The overall aim is to apply a post-colonial lense to visual sources in order to commence a decolonisation process of German archives that helps initiate a change of current narrative(s) of and on Germany’s colonial past, thereby highlighting the country’s contemporary obligation to re-evaluate its colonial heritage/legacy.