At the beginning of the 20th century the German colonial soldiers committed genocide against the Herero and Nama people in the then German colony of South West Africa (today Namibia). Today – more than 110 years later – a joint Namibian-German team, led by Prof. Dr. Jürgen Zimmerer (Department of History, University of Hamburg) is working on an extensive collection of colonial photographs linked to the tragic events.

Funded by the Gerda-Henkel-Foundation with 210.000€ and in close cooperation with the research institute “Hamburgs (post-)colonial legacy” and the Museum für Völkerkunde (Museum of Ethnology), Hamburg the project wants to contribute to the historical study of the genocide and thereby also support reconciliation. 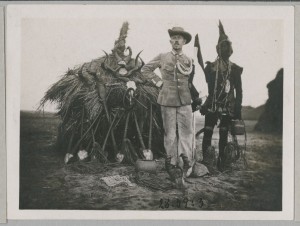 In the project “Visual History of the Colonial Genocide” three Namibian artists and a German historian are working on more than 1000 photographs that were taken by German soldiers, scientists and travellers in Namibia between 1900 and 1918 – at the time of the first genocide of the 20th century.

“The pictures offer us a new and first hand perspective on the traumatic events that happened 114 years ago, which connects the history of Namibia and Germany until today” explains Prof. Dr. Jürgen Zimmerer, the project leader. “It is utterly important that young people from both countries are working on this common history together, also in order to overcome grievances and neglect.”

“I am interested in the photographical comparison of the ‘before’ and ‘after’ of the genocide against my nation,” says Vitjitua Ndjiharine who describes the pain and suffering of the victims with her collages. “Today there is pride – about the common German-Namibian past as well as pride of the successful reconstruction of our culture.”

“For us it is very important to open our archives and analyse them from different perspectives.” pronounces Prof. Dr. Barbara Plankensteiner, director of the Museum of Ethnology. “Especially a scientific and artistic study from a Namibian point of view poses completely new questions to the colonial archive.”

In 2019 Vitjitua Ndjiharine, the multimedia artist Nicola Brandt, performance artist Nashilongweshipwe Sakaria Mushaandja and historian Ulrike Peters will show their results in an exhibition that will be presented in Windhoek as well.

Prof. Dr. Jürgen Zimmerer, Prof. Dr. Barbara Plankensteiner, the director of the Museums für Völkerkunde Hamburg, and the artists from Namibia will present the project at a press conference:

Media representatives are invited to attend, registration is appreciated by email: marianne.weis-elsner@uni-hamburg.de