Ueriuka Festus Tjikuua is a Community Activist; Senior Traditional Councillor of Kambazembi Royal Traditional Authority (Area of Jurisdiction:  Otjozundjupa Region); Secretary of Ovaherero/Ovambanderu and Nama Council for the Dialogue on the 1904–1908 Genocide (ONCD 1904–1908); Representative of ONCD 1904–1908 on the Technical Committee of the Cabinet Political Committee on Genocide, Apology and Reparation Negotiations and Member of the Negotiations Team on Genocide, Apology and Reparation.

Ueriuka Tjikuua: German colonial legacy in Namibia is present itself as footprints of the colonial system that committed acts of atrocities and robbery against our ancestors. Obviously this legacy contributes to many other evidence of German colonial wars of extermination during 1904 to 1908 and the whole period of colonial occupation of the then German South West Africa resulting from the Berlin Conference of 1884.

In the urban landscapes of Windhoek, the legacy presents itself in the form of colonial buildings, memorial monuments, military forts and street names. 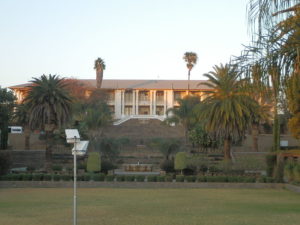 The Tintenpalast was built through forced labour between 1912–1913. Nowadays, it is the seat of the Namibian National Assembly (the Parliament). 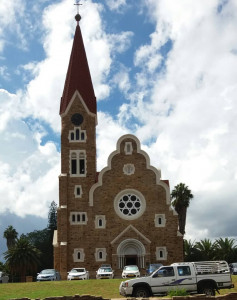 The Christuskirche built between 1907 and 1910. The church was inaugurated after the Genocide to Herero und Nama. The altar is made out of marble. 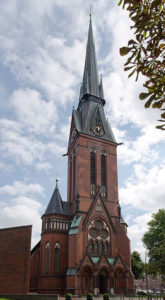 Note the similarities in the architecture of the Christuskirche in Hamburg, which was built between 1882 and 1884.

The Kaiserlicher Realschule (1909), which until nowadays functions as the German School. 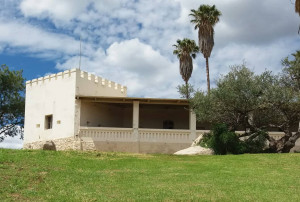 There are also some Alte Feste (Old Fortress) standing until nowadays in the capital. One of them has been partially transformed into the National Museum of Namibia.

The Reiterdenkmal, also named Rider of South West, one of the most known and controversial memorial monuments commemorating German colonial actors, and German colonial presence in the country. It was inaugurated in 1912 in honour of the German soldiers and German citizens, who died during the totalitarian war carried out against the Herero and Nama. It therefore excludes the victims of the Genocide. The monument’s inscription lists the number of deaths and its reasons (including sickness) of white people that “died in the hands of the Indigenous”.

After decolonization, the Reiterdenkmal became a monument for the commemoration of the German colonial rule, as well as a lighthouse for the white powerful minority of the country. Because of this coloniality, the monument was several times intervened by Herero and Nama activists, artists, scholars and their supporters. Six years ago, the monument was finally removed from the public space into the storage of the National Museum, at the Alte Feste.

The Lidenquist street is named after the German Gouverneur of South-West Germany, Trotha’s successor. He governed in Namibia from 1905 to 1907. He also served as a state’s agent in Nazi Germany. 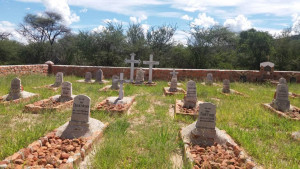 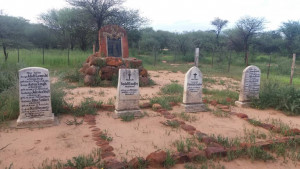 Note that ninety percent of the land in Namibia is property of the white minority, the descendants of colonial settlers. 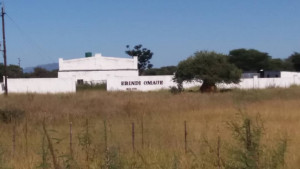 Some of the common grammar mistakes in the Otjiherero language continuously made by the white minority in Namibia are:

Tania Mancheno: Could you name one place in particular, and share with us, in your opinion, what would be the best way to decolonize this place? What use or function should the German colonial vestige be given?

Ueriuka Tjikuua: Alte Feste Museum is a German colonial institution established in Windhoek by Captain Curt von François to serve as headquarters of the Imperial German Schutztruppe. One of the largest concentration camps, where Ovaherero prisoners died at the hands of German colonial forces was in Windhoek. My suggestion is that Alte Feste Museum should be turned into a Genocide Memorial House and a similar memorial house should be established in Berlin.

Generally, German colonial vestiges could serve as evidence in the descendants’ claims for Genocide recognition, the demand for an official offer of apology and for appropriate restorative justice.

Ueriuka Tjikuua: There is no possible comparison with Namibia since Germany was never colonized.  In fact, Germany was a colonizer of Namibia, Cameroon, Tanzania, Uganda, portions of Papua New Guinea, Nauru and the Solomon Islands.

Tania Mancheno: In the last decades, the colonial legacy of the museum has become a topic, which is being discussed in Germany by political activists and academic researchers. The acquisition of art collections exhibited in European ethnological museums is today again a contested issue. In your opinion, what are the strategies for addressing the contested legacy of museums?

Ueriuka Tjikuua: The contestation in European academic circles is obvious as there are those, who want to do away with these shameful historical records, while others might consider them to be useful for historical research. Despite all this, I do not see the reason why historical records whether good or bad should be destroyed. Therefore, my suggested strategy is to keep those legacy museums as evidence and historical reference for future generations.

Tania Mancheno: Could you share some thoughts on the last developments (since November 2016) in the negotiations between Germany and Namibia on the question of Genocide?  What have been the major challenges encountered in the dialogues between the two parties?

And, in your opinion, what is most important for framing a fairer negotiation? In other words: What do the negotiations require in order to frame the discussion on the impacts of colonialism from a non-colonial, or even decolonial point of view?

Ueriuka Tjikuua: One of the major challenges since November 2016 has been to get every stakeholder on the negotiating table:

In order to frame the discussion on the impacts of colonialism from a non-colonial, or even de-colonial point of view, the negotiations would require the following: