Between February 28th and March 2nd we welcomed international scholars to our conference „Confronting the colonial past! ‚Askari‘, Lettow-Vorbeck and Hamburg’s entangled (post-)colonial legacies“ and had three fascinating days of talks, discussions and chats. We would like to share a few impressions. 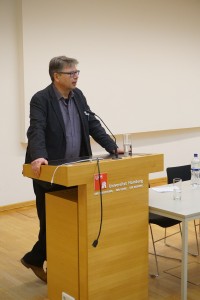 Already in his opening remark, Prof. Dr. JÜRGEN ZIMMERER, director of the research centre „Hamburg’s (post-)colonial legacy/Hamburg and (early) globalization“ touched upon various sites of colonial memory in Hamburg representing the city’s entangled (post-)colonial legacies and the dynamic development from colonialism to proto-globalization,  be it the so-called Askari-monuments and the former Lettow-Vorbeck barracks in Hamburg-Jenfeld, or the Baakenhafen docks where troops were sent to the genocidal war in Southwest Africa (Namibia) or the famous warehouse complex „Speicherstadt“, which is now part of the UNESCO world heritage. But he also referred to the (post-)colonial legacy of Hamburg University, which stands both for colonial engagement, in form of the Colonial Institute founded in 1908, and for the critical engagement with it, in form of the toppling of the Wissmann monument in 1968. 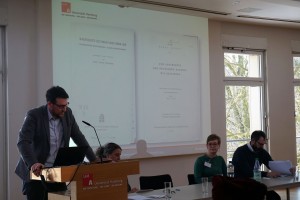 The first panel „Contributions“ gathered perspectives on Hamburg’s perception and role as a colonial metropolis: KIM SEBASTIAN TODZI (University of Hamburg) discussed the self-conception of Hamburg merchants as „ehrbare Kaufleute“ (honorable merchants) and their crucial role of in colonial expansion, spanning from Free Trade to Imperialism.

Dr. CAROLINE HERFERT’s (University of Hamburg) talk drew attention to the staging of the Other in Hamburg’s theatres and entertainment sector around 1900. She showed how colonial fantasies, Hamburg’s pride as a colonial metropolis and the racist practice of blackface were integral part of the performance practice.

Dr. FLORIAN WAGNER (University of Erfurt) interpreted „Port History as Colonial History“ and reminded of the extraordinary visibility of the port in the cityscape and local identity politics until today, making Hamburg „the capital of port pride“. He deconstructed carefully crafted myths about Hamburg harbor, its role in German colonial discourse and historiographical interpretations. 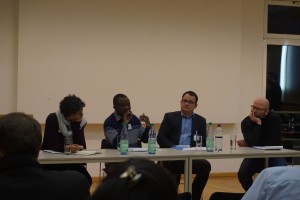 The second panel „Creating Heroes“ turned to memorialized figures of German colonialism, raising questions of how to deal with this legacy today: Dr. MICHAEL PESEK (University of Hamburg) drawing on Walter Benjamin’s thoughts on the imaginary world of modernity analyzed the discourse of colonial heroism and the idealization of figures such as Emin Pascha, Hermann von Wissmann or Tom von Prinze as one of the pillars of colonial ideology.

Dr. ULF MORGENSTERN (Otto-von-Bismarck Foundation Friedrichsruh) offered a postcolonial reading of German chancellor Otto von Bismarck and narratives of his role in German colonialism. He urged to carefully distinguish the views and perceptions of Bismarck’s contemporaries on the one hand, and the memorialising image later generations created on the other hand.

REGINALD KIREY (Dar es Salaam / University of Hamburg) discussed Cultures of Remembrance in Tansania, detailing the „Imperial Race for Colonial Commemorations“ and political dimensions on commemoration in the mandate trusteeship period in Tanganika in the 1920s to 1950s. 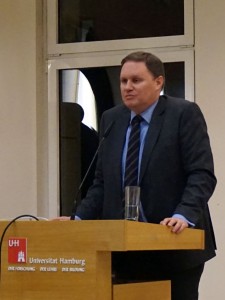 Hamburg’s senator for Culture and Media, Dr. Carsten Brosda, joined our first keynote speech in the evening and gave a welcome address reaffirming the importance of dealing with Hamburg’s colonial legacy, honouring the research centre’s work and expressing his confidence that this conference will offer impulses for further investigations and iniatives. In clear reference to the widespread discussion about Human Remains, of which there are also some 75 in Hamburg, he emphasized that  human remains should be buried; a statement that resulted in sustained applause. 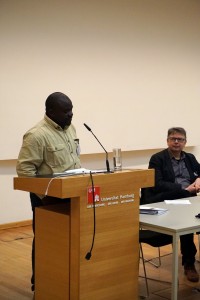 The first day concluded with Prof. Dr. Oswald Masebo’s (University of Dar es Salaam) keynote adress „Entangled Histories: Dar es Salaam – Hamburg“. His plea for going beyond the (colonial) archive and turning to oral history in order to deal with colonial history acknowledging various perspectives, was  crucial to his argument.

On the second day, the first panel was devoted to „Artistic Interventions“, giving the floor to our two Namibian artists in residence who collaborate on our project dealing with German colonial photographies from today’s Namibia kept in the Hamburg Ethnological Museum: Dr. NICOLA BRANDT (Windhoek / London) and VITJITUA NDJIHARINE (Windhoek) presented their art work ranging from video, photography to collages, showing how they are personally linked to affected by Cultures of Remembrance in today’s Namibia and how their work reflect the memory of the genocide against the Herero and Nama differently.

The second panel focused on „Institutionlizing Memories“, problematizing the colonial legacy kept in Hamburg’s museums: Prof. Dr. PHILIPP OSTEN gave a talk on the human remains that are kept in the Medico-historical Museum in Hamburg, outlining the story from their “discovery” to the set goal of restitution.

Dr. DIANA NATERMANN (University of Leiden) spoke about the “perturbed legacy” of visualizing Africa in colonial photography. Her analysis of a large body of historical German photographs taken in German African colonies that are kept at the Hamburg Ethnological Museum not only makes Hamburg’s historical contribution to the circulating images of Africa apparent, but also pointed out how contemporary photographic visualisations draw on colonial representations. 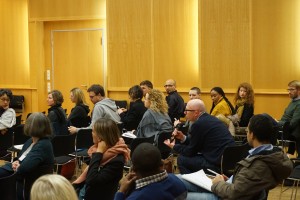 The next panel turned to „Confrontations“ of colonial legacies on both a global and local level: Dr. DENISE TOUSSAINT (University of Johannesburg) gave a talk on „Falling Statues, Rising Debates“, looking back three years after beginning of the “Rhodes must Fall”-movement, which not only contributed to the  South African discourse on Decolonization, but sparked also sparked global debates.

MERYEM CHOUKRI, TOM GLÄSER, and JONAS PRINZLEVE (Hamburg) from the working group „Quo Vadis Hamburg“ spoke about „Dealing with Genocide and Colonial Amnesia in the Local Context“ of Hamburg, arguing that colonial amnesia stabilizes the positive ‚cosmopolitan‘ image of the city of Hamburg, perpetuating a racist construction of space. They called for action in order to include people of colour living in Hamburg in the dealing with this legacy. 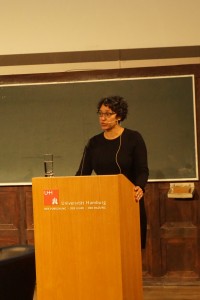 TANIA MANCHENO (University of Hamburg) elaborated on „Facades of (Post-)colonial Memory“, focusing on traces of colonialism in the historical warehouse complex of the Speicherstadt, as well as problematic references to colonialism in the newly built quarter HafenCity.

The public section of the conference started with a second keynote by Prof. Dr. MICHELLE MOYD (Indiana University Bloomington) entitled „Askari Afterlives“, which addressed a central part of popular culture and 1920s romanticized colonial revisionism that also stands for Germany’s entangled history of colonialsm. The keynote traced the lives of Askaris, their afterlives as former German Soldiers after 1918, as well as the memory in popular culture and memorials linked to the Askari. 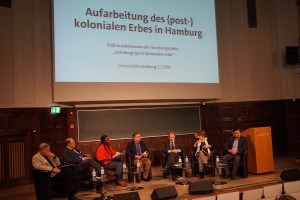 On the final day, an excursion to the „Tansania Park“ and former „Lettow-Vorbeck-barracks“ in Hamburg Jenfeld allowed the participants to see and experience some of the most crucial and problematic lieux de mémoire in Hamburg, linking colonialism and national socialism: A connection which is not yet contextualized properly.

Until an adequate concept is developed to deal with this site, the „Colonial Army Memorial“ honouring fallen German soldiers and Askaris (erected 1939) and the so called Askari reliefs (created in 1938) are not open to the public. Prof. Dr. Jürgen Zimmerer, Dr. Reinhard Behrens, former member of the Tansania Park’s advisory committee, as well as Dr. Thomas Overdick from Hamburg’s Ministry for Culture and Media talked about the history of this registered heritage site and the city’s efforts to deal with this sensitive site. 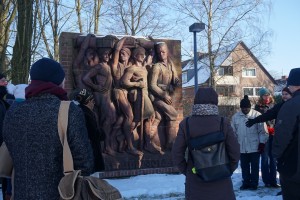 The conference closed with a final discussion that not only recalled the diverse aspects and dimensions of Hamburg’s entangled colonial history brought up during these intense three days, but also raised issues of how to continue the scholarly work of colonial legacy and how to deal with Cultures of Remembrance not only from a scholarly perspective, but also on a political and cultural level.